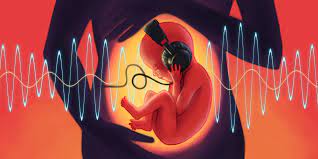 What Can Babies Hear In the Womb? More Than You Might Think

Yes, babies hear in the womb, and that too everything!

Ababy’s senses — sight, hearing, smell, taste and touch — develop several weeks before she was born. This means that, while adults cannot remember what the womb looked like after birth, they can recall the sounds and sights we experienced in our last weeks as a fetus. Recent research has shown that babies learn from the sounds they hear when they are born. Dads-to be have great opportunities to talk to their child in utero, which means that they can engage with them during pregnancy.

When Can Babies Hear in the Womb?

At around 10 weeks of gestation, the inner ear structures start to form. However, the baby cannot hear until all structures are wired to your brain. Researchers have suggested that some fetuses might develop the ability hear as soon as 14 weeks old, as measured by their reaction to sonic vibrating. The Queen’s University of Belfast published a 1994 study on fetal hearing that found babies begin hearing in the womb around 19 weeks of pregnancy. Babies in the womb respond to sounds between 500 and 3000 Hz, which is close to the lowest range of what adults can hear. As the structure of the ears develops, the acoustic range grows and babies respond to frequencies between 250 Hz and 3000 Hz by 33 weeks.

When Does a Fetus Have Cognitive Function?

As any parent with a toddler will tell you, hearing and listening are two different things. While hearing is passive, listening is active and engaged. Although a fetus may be able hear outside the womb 18 weeks after conception, that does not necessarily mean they are paying attention. The third trimester seems to be the most important. This ability to listen, respond to and remember sounds increases.

Another study by the Belfast University fetal hearing specialists examined whether a fetus can recall sounds it heard in utero. The survey included two groups of expectant moms. One group watched British TV shows every day, while the other did not. The study recorded fetal behavior. The discovery showed more movement later on in the pregnancy with the same theme song playing. The fetus did not hear the song. Newborns two to four days after birth heard the song again. Babies who heard the song in utero recognized it. The rest did not.

Recognizing a theme song is a sign that an infant has working memory. This happens in the later stages of pregnancy and infanthood. However, this does not necessarily mean that the infant is learning. A 2017 study brings us closer to evidence of fetal-learning.

Dutch researchers examined a group of Korean-speaking people who got adopted from Korea. Although they did not know Korean, the people had heard the language in their wombs and shortly after birth. The experiment involved teaching Korean adoptees and a group of Dutch natives Korean words to determine how fast each group could learn the language. The Korean adoptees were faster and more capable of learning Korean words than native Dutch. The ability was also true for children adopted before the age of six months. It was equally true for older children, such as those adopted at 17 months.

Researchers found that babies’ basic understanding of language is developed in the last trimester of pregnancy, while they are still in their mothers’ wombs. This priming them to recognize the language they were born to. The brain is still primed for these languages even years later.

What to Say to Your Baby in the Womb

It is important to remember that babies need to listen before they are born. It doesn’t mean you can make them geniuses by reading Shakespeare over your partner’s bump. Parents should speak to their baby while they’re still in the womb. Babies will retain the sounds and cadences that they hear. Babies are full of surprises when they’re in the womb. From how they will look like to the fetus learning, baby are growing in a womb not only physically but mentally is quite fascinating.

Babies can’t help but listen to their mother’s voice. The voice is always with them, wherever they go. However, this is not always true for fathers. Fathers need to spend time with their unborn children to learn from them. This could be reading to them, telling them about your day or simply thinking aloud.

Fathers can create a bedtime storytime ritual for bonus points. It’s possible that the baby will feel more relaxed and soothed if dad reads the same story once they are born.